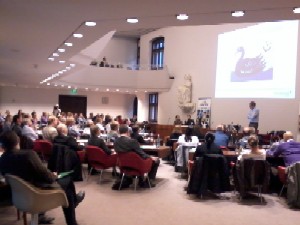 Over 180 participants representing cities from 18 European countries, including mayors, vice-mayors and heads of public authorities, went together in Freiburg, Germany, to learn from the city’s radical efforts to improve energy-efficiency. A study tour and workshop were held from 23 – 25 October in the framework of the Covenant CapaCITY project, in collaboration with the Local Renewables series.

Participants heard first-hand accounts of the challenges faced and solutions found in implementing Freiburg’s exemplary energy policies. Klaus Hoppe of the Energy Department and Dieter Bootz of the Department of Waste Management (ASF) outlined how the German city is using its energy policy to reach broader climate mitigation goals.

The green district of Vauban was the first stop on the study tour. A former military base developed into a residential area in the 1990s, Vauban is an internationally known model of sustainable urban planning.

Next was the district of Rieselfeld, a model of ecological housing and the region’s largest neighbourhood project. All residences are built as low-energy buildings, and the use of renewable energy and district heating are part of a far-sighted energy concept.

The final stop was a tour of the recycling facilities in the district of Haslach. The city of Freiburg’s waste policy is based on strict sustainability principles, and favours waste prevention, followed by waste recovery, and finally, if no alternative is open, ecological disposal.

The workshop, titled ‘Procurement and Financing at Local Renewables’, took place on the second day of the event, and looked at improving financial access to sustainable energy roll-out, a particularly important topic in a time of widespread financial austerity in Europe.

The event was supported by the Conurbant project and the City of Freiburg, with the participation of the LEAP project. Covenant capaCITY is co-funded by the European Commission’s Intelligent Energy Europe Programme.