Osijek is the fourth largest city in Croatia with a population of 128,095 in 2011.[1] It is the largest city and the economic and cultural centre of the eastern Croatian region of Slavonia, as well as the administrative centre of Osijek-Baranja county. Osijek is located on the right bank of the river Drava, 25 kilometres (16 mi) upstream of its confluence with the Danube, at an elevation of 94 metres (308 ft).

Transport links to and from Osijek include major railway and highway junctions, a river port, and Osijek Airport. International flights from the airport to Cologne/Bonn Airport in Germany commenced in March 2008. A four-lane highway, part of the Pan-European Corridor Vc, linking Osijek to the rest of the Croatian modern highway network, was completed and opened in April 2009. From Osijek, it is possible to take the train to numerous destinations including Zagreb, Rijeka, Požega, Virovitica, Našice, Slavonski Brod, Slavonski Šamac, Erdut, Vrpolje, Dalj, Đakovo, and Beli Manastir, from where there are connections on to Hungary. There is also a daily service from Budapest to Sarajevo that stops in Osijek.

A small tram network runs through the city, which has been in continuous operation since 1884 and is the only tram network still in operation in Croatia outside of Zagreb.

As part of further development as a regional food industry and agricultural centre, a major (working) collective for agriculture and industry was established in 1962. The Saponia chemical factory is the largest factory located in the Osijek area. It is a major producer of detergents, soap and cosmetics whose products are recognized throughout the region as being of quality. It is by far the largest exporter in the city area. Other industries include a regional brewery, the Pivovara Osijek (first Croatian beer), and a sugar processing plant. One of the earliest factories was the Drava match factory, established in 1856, which no longer exists. Other industries included production of synthetic materials, agricultural machinery, metal furniture, wood and timber, textiles, footwear, and silk, as well as metal processing and printing. However, the 1990s saw most of these industries decline and in some cases close completely. However, the city remains at the centre of an important agricultural region.

During the war in Croatia, from 1991 to 1995, the city avoided heavy destruction (unlike nearby Vukovar, for example) and sustained moderate damage, especially to the centre and Co-cathedral of St. Peter and St. Paul and to the periphery. More than a thousand (over 1200) civilians also died in the daily shelling of the town. While some buildings still have mild damage, most often the occasional superficial pockmark from artillery and mortar fire, the city's facades are generally in good shape, due to extensive restoration in recent times, preserving the charm of its intricate Austro-Hungarian Baroque architecture in the older quarters of town.

Major institutions in the city include the Josip Juraj Strossmayer University of Osijek (established in 1975), the Croatian National Theatre, the Museum of Slavonia (established in 1877), and the printing house dating to 1735. The city also has several gymnasiums, the oldest of which dates to 1729, a drawing school from the 19th century, a zoological garden, a centre for the promotion of livestock breeding, and an institute for sugar beet farming.

Osijek remains a popular domestic tourist destination for its Baroque style, open spaces and ample recreational opportunities. The most important sights in the city include the main square, Trg Ante Starčevića, Tvrđa the 18th century Baroque citadel, the promenade along the Drava ("promenada"), and the suspension pedestrian bridge toward Baranja.

The Municipal Park of King Petar Krešimir IV and the Tomislav Park date from the beginning of the 20th century, and are protected national landmarks. Osijek is also home to one of the few Croatian zoological gardens, along the Drava river. 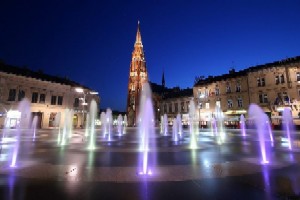