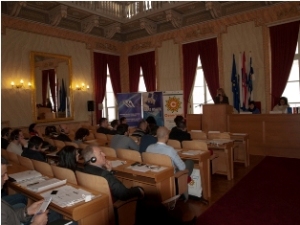 Final conference of the project Conurbant was held in Osijek, Croatia, on April 24th 2014. We decided to organize it as an event which will give insight to the Europe 2020 targets on climate changes and all the main ideas behind the Conurbant project such as dealing with CO2 emission reduction and SEAP development, being a signatory of Covenant of Mayors, sharing good practices of the tutoring municipalities as well as introducing the concept and results from peer-to-peer approach. Also we had to attract the local public and stakeholders, so we included the topic of Croatian efforts to achieve the Europe 2020 goals. The conference was divided into four thematic sessions.

The first one was about the CO2 emission reduction and energy efficiency in the Republic of Croatia. For this session we invited Ministry of Economy of Republic of Croatia to present the legal framework for achieving Europe 2020 goals in energy consumption and CO2 reduction, the Fund for Environmental Protection and Energy Efficiency to give the participants an insight on financing possibilities for energy efficient development in Croatia and finally the association DOOR from Zagreb to present the SEAP development process. DOOR was chosen because of their experience in SEAP development in the framework of EU funded projects.

The third and the fourth part were exclusively dedicated to Conurbant achievements and partners’ experiences. Results of the project were presented through the project video clip and best practices and experiences were shared by the tutoring municipalities of Alba Iulia and Padua during the third session.

We invited not only project partners but all stakeholders from Croatia, Hungary, Bosnia and Herzegovina and Serbia interested in this topic and also general public. The conference was well attended and in the end gathered 71 participants from project partner municipalities and technical partners, conurbation towns, Croatian public and important stakeholders.

Also, the conference had good media coverage. The clip was made and aired during prime time news on regional TV station. Regional newspapers and important national, regional and local web portals published articles on it too. Project flyers and other visibility materials were disseminated during the conference.

In the end, we can conclude that we succeeded in organizing a successful final conference which managed to gather all important stakeholders and to attract the public eye and general interest in the project Conurbant and its goals.